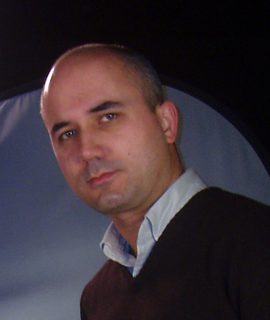 João Carlos Callixto (Lisbon, 1977). Music Researcher and Author of Radio and TV programs. Collaborator of music and literary magazines since 1996, he has written books on music and notes for re-releases of many historical Portuguese music records. In 2007, he co-curated an exhibition on Portuguese Music from 1960 to 1980, which took place in Lisbon’s Music Museum. In 2010, he wrote several entries for the Encyclopaedia of Music in Portugal in the 20th Century, a 4-volume work in which he was also responsible for the discographic research. He is the co-author and one of the main coordinators of a TV documentary series in 26 episodes about the History of Portuguese Popular Music, nominated for the 2012 Authors Award (SPA, Portuguese Authors’ Society). He was a member of the Portuguese jury for the Eurovision Song Contest 2012 and he was a resident juror for the RTP Song Contest 2017, which would lead to Portugal's victory in that year's Eurovision Song Contest.